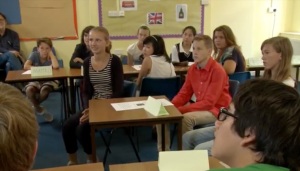 The photograph is a still from ‘Teachers at Work’, a video which accompanies the 2015 (fifth) edition of  The Practice of English Language Teaching. We filmed primary, secondary, tertiary and adult classes in Mexico, Turkey and the UK.

‘PELT’ was first published in 1983.  That first edition was written while I was involved in teacher training in Mexico. It came about because on returning to that country after completing an MA in Applied Linguistics my brain was so addled with undigested applied linguistics that my trainees couldn’t understand anything I said. But they could understand the written notes I gave them after my mixed-up input sessions! Those notes became the first edition of the book.

In 32 years the book has become something of a standard and because of this it has become absolutely necessary to update/upgrade it over the years (1991, 2001, 2007, 2015). Speaking personally it has been a kind of self-willed CPD (continuing professional development). And for that I will be forever grateful. Thank you Longman, thank you Pearson!

So what is new in 2015? What are the issues in today’s English language teaching world?  How has the ELT world changed in 32 years. It seems to me theatre about three big areas to think about:

1 The world off English and English language teaching has changed out of all recognition. Well in the first place, speakers of English as a second or additional language outnumber first-language speakers (‘native speakers’) but a factor of maybe 2:1 (Rajagapolan) 4:1 (Crystal) or 5:1 (Graddol). Which means that the varieties of properly functioning English that are spoken have multiplied enormously. Furthermore the majority of English-language conversations in the world take place between people, neither of whom have English as a first language. And so all the discussions about what variety to teach, about, for example, ELF (or English as an international language) are absolutely vital – and the raise concerns about the meaning of accuracy as Scott Thornbury articulated so well recently. Add to that the prevalence of non-native speaker teachers (or ‘multilinguals’ as Suresh Canagarajah would like such people to be called), and it is clear that the old ‘learn-to-speak-English-like-a-native’ trope of the middle of the twentieth century is long long gone.

2 Technology is the big game changer I guess. Is Adaptive (teacher-less) learning the way forward? If you want to know about that read Philip Kerr’s informed and somewhat chilling blog. Do we believe in the ‘technology can solve everything’ in the SOLEs (self-organised learning environments) world of people like Sugata Mitra? Is the course book doomed – with access to the internet and the ubiquity of mobile devices? (but careful! Remember that 60% of the world’s population still have no access to the internet according to Sir Tim Berners Lee a few months ago)

3 And leading on from that, are any materials necessary? What ARE the best ways to learn a language? Is the mind a computer (e.g. Chomsky, Krashen etc)? Does explicit knowledge about language help learners? Is communication the key – is interactive group work the way forward? Is dialogue necessary  for learning to take place (pace Dogme or unplugged teaching)? And what about CLIL (content and language integrated learning?

There are other issues too:

* ‘western’ language teaching is not universally exportable. We (people brought up on western-style methodology) have to learn to be importers too;

* the whole learning styles discussion has been enlivened by people who question its lack of evidence base.

But what do YOU think are the pressing issues for language teaching today? 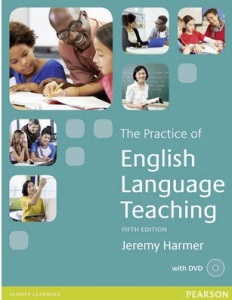