Does size matter? Or is it shape? Or room?

As October faded into November I found myself giving talks at the fabulous TELLSI conference in Mashad, Iran, immediately followed by a stint at the IGA conference (Instituto Guatamalteco-Americano) in Guatemala City, and then MEXTESOL in Queretero, Mexico. That was special because it was the organisation’s 40th anniversary, and I have to admit (proudly, come on, proudly!) that I spoke at MEXTESOL’s first ever conference in Tampico all those years ago.

Perhaps the most interesting of the three conferences was the one in Iran. Why? Well because it’s not so easy to get to Iran right now (though it may, InshAllah, get easier soon if our governments talk more to each other). But the conference was beautifully organised, the welcome was effusive and the standard of presentations was terrifically high. I found myself wishing that there had been more international visitors listening to the riches that Iranian ELT has to offer.

In Mashad, at the Tabran Institute of Higher Education I spoke in a large theatre, more or less rectangular-shaped, with me on one of the shorter sides (in other words it was a kind of vertical arrangement, full frontal – see the photo) 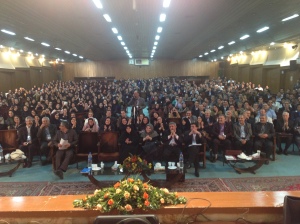 The teachers at the 2013 TELLSI conference in Iran

In Mexico I spoke in a massive modern theatre with galleries and circles things. But other large-audience speakers found themselves speaking in  rectangular rooms, only they were on one of the long sides of the rectangle. In other words they had a kind of horizontal room to deal with. That’s often happened to me, as in a Pearson conference in Mar del Plata, Argentina some years ago (see picture)

The thing is, I find it much much more difficult to animate one of those ‘sideways-on’ rooms than a long vertical one, and I wondered whether there is something wrong with me! But all the walking from side to side is sooo tiring (maybe I should stay still)! With a full-length room you can still feel like you are talking to the back of the room, but in a sideways-on room I always feel as if some people (especially in the front rows) are far far away. Rooms like that never get so engaged (I think) as vertical rooms.

Or is it just me? Or are there other things going on? For example, I reckon the acoustics make or break a presentation. I was in a large room with echo-ey acoustics in Montevideo a few weeks ago and I couldn’t understand a word the speaker said (but that might have been my Spanish!). Is the distance of the stage from the audience a factor (if you can’t get down to the audience level)? Or is the deciding factor (for success./engagement etc) the amount of available space? Do you prefer (both as speaker and participant) a crowded or nearly empty space?

If YOU were designing a new conference space how would you design it? When you go to a presentation where do YOU like the speaker to be? If you are a frequent presenter, what’s your favourite and least favourite space?

I’d be fascinated to hear your views.