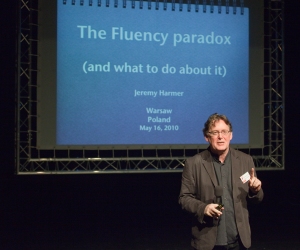 Not showing off – just illustrating a dilemma!

On Twitter today Scott Thornbury raised an issue that is of increasing concern to those of us who speak at a number of international conferences. And since I, like many others, feel partly responsible, and because I, too, have the same ‘problem’ it seems worth talking about here – to see if anyone has a solution to this conundrum.

Yesterday morning Scott gave a really good talk called Six big ideas and one small one at the DOS (director of studies) conference  of the International House World organisation.

It was fabulous conference of a great worldwide organisation (I should declare an interest; I am a trustee of IHWO).

I tweeted out the main points of Scott’s talk. This was partly a homage to a terrific act, partly a way of making notes for myself (and a record) and partly the thought that other people out there on Twitter who weren’t at this small conference might like to hear a reasonably clear account of what Scott was saying.

(I was not the only one: @shaunwilden and @ihDubai amongst others tweeted the content of the talk too; you can read our comments on twitter by checking #DOSconference).

And the session was filmed and will soon be available online.

So these are my questions:

1 have we – and the filmers – ruined Scott’s life? Does the fact that talks are tweeted and that films of them can be seen all over the place mean that the talks can’t be used anymore? In other words, can Scott do his Six big things and one small one talk anywhere, ever, again?

2 Do tweets out of conferences really inform people who are reading the tweets or are theyjust ‘mood music’ for people who can’t attend?

I have concentrated on Scott Thornbury because he raised the issue. But it’s a real issue for me too – and for many other presenters out there. For example, a film of a whole session I did in Santiago in Chile went up online; can I continue to use those activities, or have too many people seen them on film now? Or perhaps people don’t watch the whole film through anyway – and even if they do they don’t remember much!

A talk of mine called The Fluency Paradox (about a year old) has been tweeted a few times. So when/if I give it again it’s possible that many in the ‘audience’ will know what’s coming. Will that ruin the talk? Should I abandon it? But like the successful lessons we plan and like to re-use I am reluctant to chuck it into the bin…

So that’s it. More than two questions. But I hope you see our dilemma.

Looking forward to your reactions.